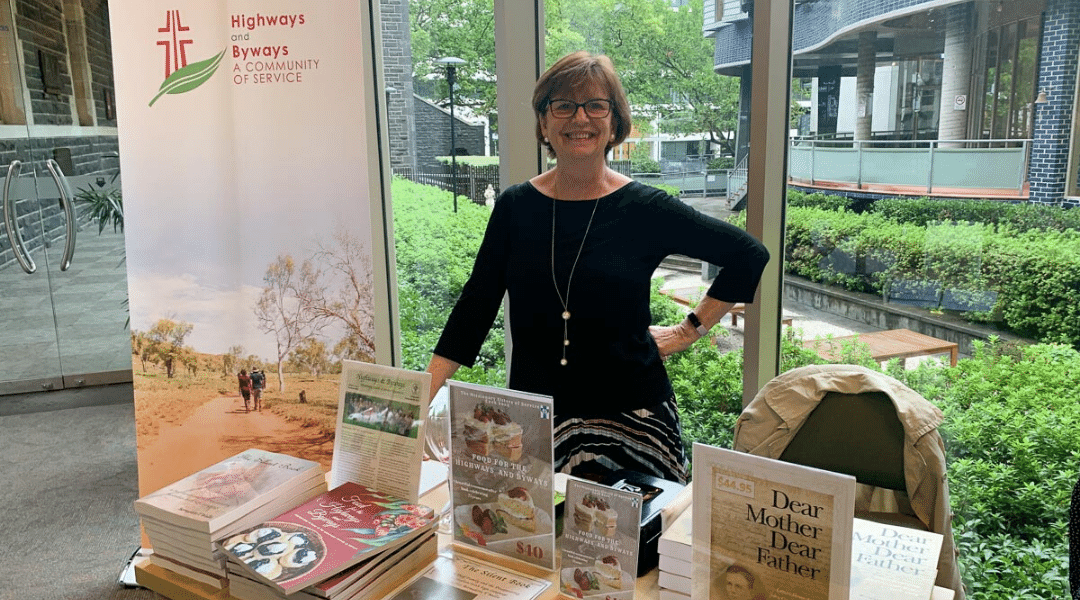 “History … is a gift from which to understand and attempt to make sense of our past and our present, often to make resolutions or decisions, even unconsciously, moving into a hope-filled future.”  This is an excerpt from the latest book by Bernadette Wallis MSS, Dear Mother Dear Father: Dear Father: Letters Home from John Corcoran Wallis 1927-1949, which was launched in Melbourne last night.

“It is an honour to have been invited to launch Dear Mother Dear Father: Letters Home from John Corcoran Wallis 1927-1949,” stated Prof. McMullen. “In so doing, I am pleased to be able to pay tribute to Bernadette Wallis, whose vision, scholarship and dedication have come to fruition in this fine volume.

“The publication of this book was timely,” she said. “In the first instance, 2019 marked 75 years of the Missionary Sisters of Service, the congregation founded by Fr John Wallis, which has become his most significant legacy to the Australian Church. The publication of these unique letters was a fitting addition to the 75-year anniversary celebrations.

“Secondly, the Missionary Sisters of Service have recently established Highways and Byways: A Community of Service, a new expression of their charism to take the MSS legacy purposefully into the future. It is critical that those who animate the Highways and Byways mission are able to get to know the man who envisioned this charism. This book makes a critical contribution in this regard, to getting to know John Wallis.

“This volume makes available letters of Fr John Wallis covering a period of two decades of his younger life. They offer a window into another era of the Australian Church and, in particular, into a man who would make a unique contribution through the founding of the Missionary Sisters of Service. The publication of letters has particular value ― thus, St John Henry Newman wrote to his sister in 1863:

… the true life of a man is in his letters … Not only for the interest of a biography, but for arriving at the inside of things, the publication of letters is the true method. Biographers varnish, they assign motives, they conjecture feeling … but contemporary letters are facts [Newman to his Sister, Mrs John Mozley, 18 May 1863].

In ten chapters, Dear Mother Dear Father assembles 100 letters into sections marking significant stages of John Wallis’ life up to his late thirties, including entering St Columba’s Seminary in Springwood at 16 years of age; progressing to St Patrick’s Seminary in Manly; his Ordination year; his early years of ministry in Tasmania; testing his vocation as a Columban missionary; returning to Tasmania, and founding the Missionary Sisters of Service (or the Home Missionary Sisters of Our Lady as they were called initially).

Author Bernadette Wallis provides a brief introduction to each of the 10 chapters as well as setting both the family and historical context prior to reproducing each letter. In the book she writes: “My hope was to find [in each letter] a gem or gems that energised the life of the young” John Wallis [p. xiv].

At the conclusion to each chapter, a pertinent Church figure has written a reflection on the preceding letters. In his foreword to Dear Mother Dear Father, Professor Frank Brennan SJ AO describes these reflections as “a brilliant flourish” on Bernadette’s part. The volume includes significant reflections by Austin Cooper OMI, Edmund Campion, Adrian Doyle, David Ranson and Corrie van den Bosch, amongst others.

Prof. McMullen went on to explain: “On another lighter note, Dear Mother Dear Father might have been given the ‘sticky’ title of the Mystery of the Westward Ho! Assorted Toffees Treasure Chest. The letters, stored in a decorative tin of this description, came to light in 2014 in the Missionary Sisters of Service archives in Hobart.

“The correspondence had been placed there in 1966 by John Wallis’ brother, Fr Brian Wallis, who had requested that the letters be kept secret until after his brother’s death. As his mother’s executor, had he gathered up the letters and placed them in the Westward Ho! Assorted Toffees tin or had Emma, John and Brian’s mother, already chosen this secure storage to preserve them, prior to her death in 1955?

“We can be grateful to Emma, Brian and Carmel Hall MSS, the Sisters’ archivist, that they were preserved. We can be especially grateful to Bernadette Wallis, Fr John and Fr Brian’s niece, that they have now been professionally published. Like Fr John himself, this book is a special gift to the Australian Church.

“I am confident that this new work will enrich its readers and inspire those seeking to take forward ‘on the highways and byways’ the spirit of John Wallis and the charism of the Missionary Sisters of Service.”

Bernadette Wallis MSS provided closing remarks, expressing her deep gratitude to all who were involved in the making of the book, especially to the publisher, Coventry Press. Thanks were also extended to Kevin Lenehan, Master of Catholic Theological College, for hosting the launch.

The book will be launched in Toowoomba and Brisbane in the coming week. Find out more, here.