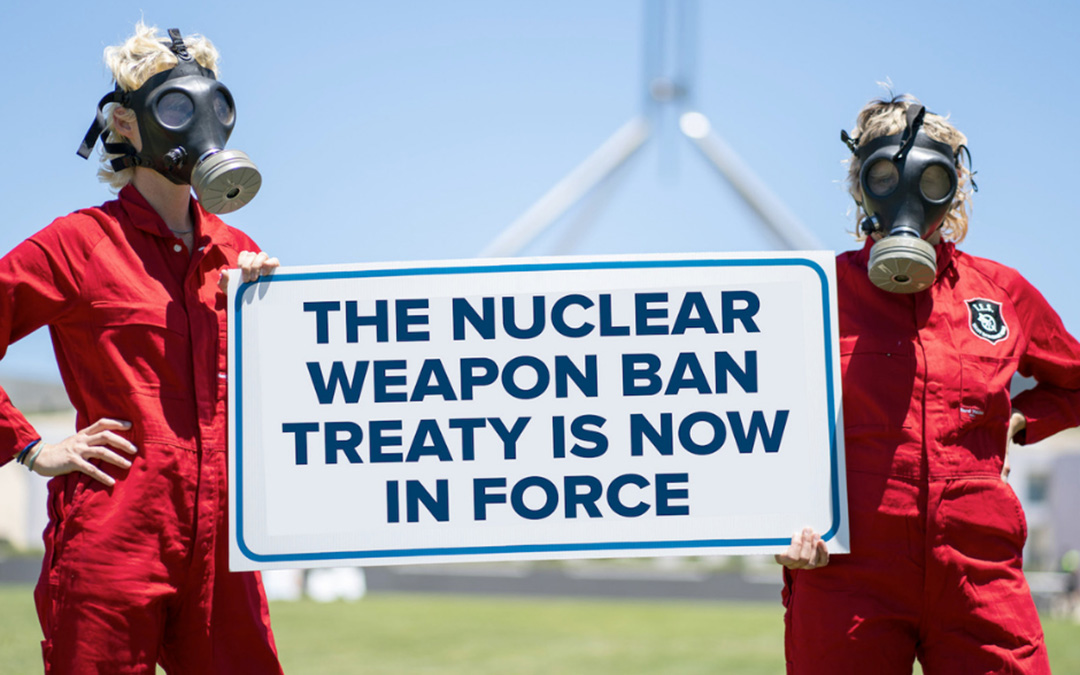 We Missionary Sisters of Service endorse the call from the Bishop Delegate for Social Justice, Bishop Terry Brady, who has written to Prime Minister Scott Morrison, urging Australia to join the countries who have signed a treaty to ban nuclear weapons that comes into force today, 22 January 2021. The majority of United Nations member states, including the Holy See, have signed the Treaty on the Prohibition of Nuclear Weapons. Australia, however, has not yet become a signatory.

In his letter to Mr Morrison, Bishop Brady explained that the elimination of nuclear weapons would be a major step towards creating peace in the world. “Experience has taught us that the threat of mutual destruction – with the possibility of the total destruction of humankind and our common home – cannot provide a foundation for peace and security in the multipolar world of the twenty-first century.” 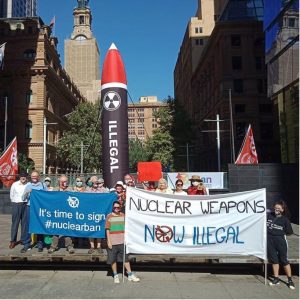 “Nuclear weapons are incapable of addressing terrorism, asymmetrical conflicts, cybersecurity, ecological problems, or poverty. Any use of nuclear weapons is clearly immoral as they are inherently indiscriminate and their impact is uncontainable in time and space.”

Bishop Brady said the continued availability of nuclear weapons “poses an unacceptable risk of deliberate or accidental use, and it diverts resources from the things that positively foster peace”.

Bishop Brady’s letter is not the first effort by Catholic and other religious leaders to call for the Australian Government to sign the treaty. In August last year, dozens of religious groups, including the Missionary Sisters or Service, the Bishops Commission for Social Justice, Mission and Service, Catholic Religious Australia and a number of Catholic religious institutes signed an open letter to the Prime Minister and Opposition Leader.

Pope Francis has been an international leader in calling for the prohibition of nuclear weapons. Speaking to a 2017 UN conference focused on creating something like the current treaty, the Pope said: “International peace and stability cannot be based on a false sense of security, on the threat of mutual destruction or total annihilation, or on simply maintaining a balance of power.

“Peace must be built on justice, on integral human development, on respect for fundamental human rights, on the protection of creation, on the participation of all in public life, on trust between peoples, on the support of peaceful institutions, on access to education and health, on dialogue and solidarity.”

Bishop Brady’s letter tells the Prime Minister that “these positive foundations of peace” are commitments that successive Australian governments have held. “However, the impact of these efforts is undermined by the continuing existence of nuclear weapons which create fear, undermine relationships of trust, and constrain dialogue,” he wrote.

“It is time for Australia to begin the process of stepping away from all involvement with nuclear weapons by signing the Treaty on the Prohibition of Nuclear Weapons.” 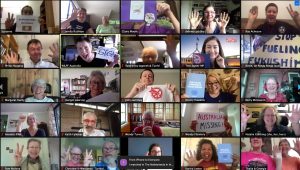 On January 22, 100 people gathered online to celebrate the entry into force of the Treaty on the Prohibition of Nuclear Weapons. Hosted by WILPF Australia, the ICAN Ambassador and nuclear abolition campaigner Aunty Sue Coleman-Haseldine spoke along with Ray Acheson from WILPF’s Reaching Critical Will, Bishop Philip Higgins and others.

ICAN’s Dimity Hawkins said, “From the beginning, we knew that one of our biggest challenges would be building political will. Because that is what it takes to dismantle these weapons – it is not magical thinking – it is a matter of political determination.”

“Australia has an obligation to pursue nuclear disarmament in good faith, and there is no skirting around that. The new Treaty is not in conflict with any of our other established nuclear and disarmament obligations. It is clear, common- sense and compelling international law, and our government must get on board.”

The Missionary Sisters of Service will continue to pray for, and do what we can to support the call to ban nuclear weapons!