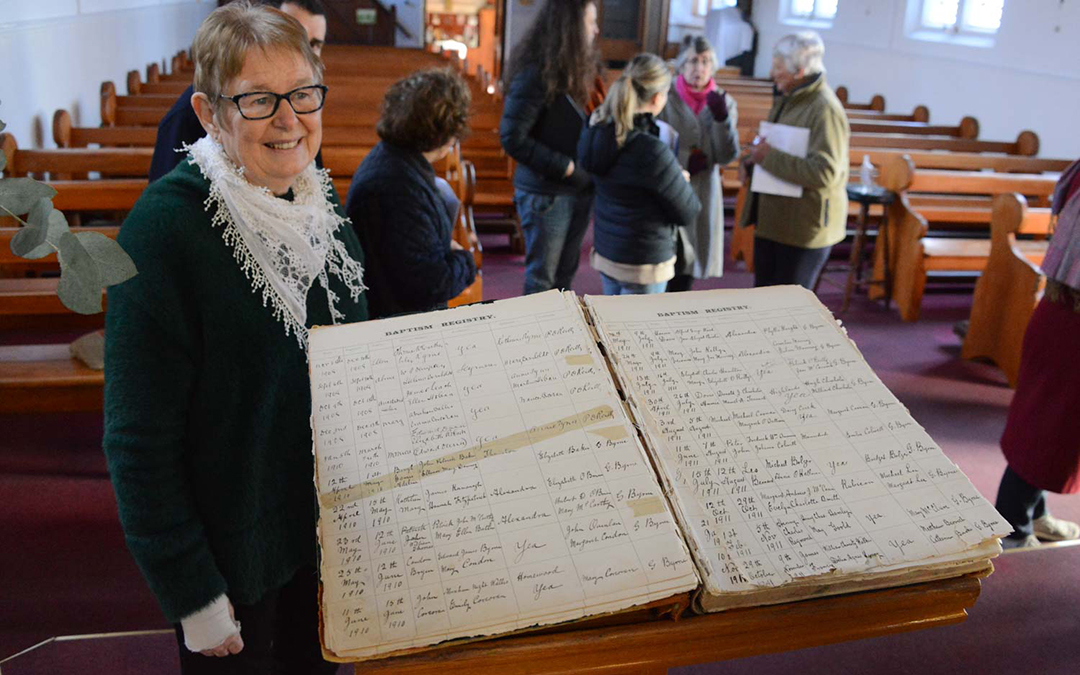 The founder of the Missionary Sisters of Service, Fr John Corcoran Wallis, is originally from Yea, in country Victoria, about an hour and a half’s drive from our Melbourne sisters. Born in 1910, ordained a priest at 22-years for the Archdiocese of Hobart (December 1932), and having established our community of women in 1944, we’re so fortunate that all of us MSS knew and loved Fr John in our years of formation and service. He died on 3 August 2001, aged 91.

It is another blessing that his niece, Bernadette Wallis MSS, continues to share the legacy of her uncle in a special way, through her writings, and particularly her latest book, Dear Mother Dear Father: Letters Home from John Corcoran Wallis 1927-1949. Helping to bring these 100 letters to life, and in keeping Fr John’s memory and legacy alive, Bernadette recently led a group on ‘The John Wallis Heritage Trail, Yea’, which focussed on his family and early life, and his seminary days until he goes to Tasmania.

On a foggy and crisp Winter’s morning in early August, twelve people including some MSS, MSS Stewardship Council, Highways and Byways staff (our mission entity), and Yea friends who had been neighbours to the Wallis family, gathered at Sacred Heart Church in Yea. Here, the group enjoyed scones (in true MSS tradition), paid tribute to the First Nations people of the land, listened to some history provided by Bernadette, and then looked over the well-worn pages of the Baptism Registry. At the very bottom, we saw the entry for ‘John Corcoran’, his Baptism registration on 15th June 1910, only four days old. The names of his parents, Abraham Knight Wallis and Emma Corcoran are listed across the page, along with his Sponsor Mary Corcoran, and his home, Homewood, Yea. The celebrant is Fr. G. Byrne.

On the stand at the back of the altar in the church, stands a gold-plated cross. The inscription shows that John Wallis’ mother, Emma, donated the cross in honour of her mother, Maria Corcoran (McAsey), who came out from Ireland with her parents as a 9 or 10-year old in 1854, and who was a faithful woman of prayer in the Yea parish.

We then drove past the hospital site where John Wallis was born, en route to Pioneer Cemetery, on the outskirts of Yea. Here we visited the gravesite of John’s parents, Abraham and Emma Wallis. Bernadette spoke of her Irish great-great-grandparents, Thomas and Eliza McAsey and other relatives, who were also buried in the cemetery. We listened to the first letter John wrote to his ‘Dear Mother’ in May 1927, after he had arrived at Springwood Seminary on 15th April 1927.

John is 16 years old at the time and as we listen, we imagine him in a huge institutional building as he writes home from St Columba’s College. He has been there two weeks or so after the long train trip from Homewood to Seymour, Seymour to Albury, then changing to another train in Albury to Sydney, Sydney to Springwood, then coach to St Columba’s Seminary in the middle of the bush (Oryang-Ora Aboriginal group, belonging to the wider Darug Aboriginal tribe of the Sydney region).

Dear Mother,
I received your most welcome letter on Saturday. I was very glad to get it. I am writing this one to wish you very happy returns of the day on your birthday next Thursday … Well Mother I am getting on alright and I am feeling goodo. I eat well. … I am in Philosophy. Mother, you don’t know how hard it is going to be for me to get through. I have about a hundred pages of notes to copy up and learn. A lot of them are in Latin. I am a long way behind. I have to make use of every spare minute I can get. – Excerpt from letter, 2 May 1927. St Columba’s College, Springwood.

From there, the group travelled to Wirrabong, Homewood, where the Wallis family lived (and before them, for thousands of years, the Taungurung people). Here, we read John’s second letter, which he addressed to ‘Dear Father’, dated May 1927 (page 6).

We drove past John’s first primary school in Homewood, followed by Homewood (Community) Hall established in 1906, and then to the area where the home of Emma (Corcoran) Wallis, wife of Abraham, was located on Switzerland Road, outside of Yea.

The day ended with lunch in Yea at a local café, with the group sharing their reflections on the experience. There was much gratitude expressed, and the importance of connection—connection with the land, with family spanning back through the ages, with community and with each other. The group expressed feeling a deeper connection with the story of John Wallis, this young boy who loved his parents, and who left Victoria to join the seminary and eventually become a priest for the Archdiocese of Hobart, Tasmania.

His great love for his mother and father, for Mary, the Mother of God, for the land, and for people, continues to shine through the words of his letters, and in those who knew Fr John in his pastoral mission. The MSS will host this John Wallis Heritage Trail each year, so if you’re interested in a future outing, please contact us.