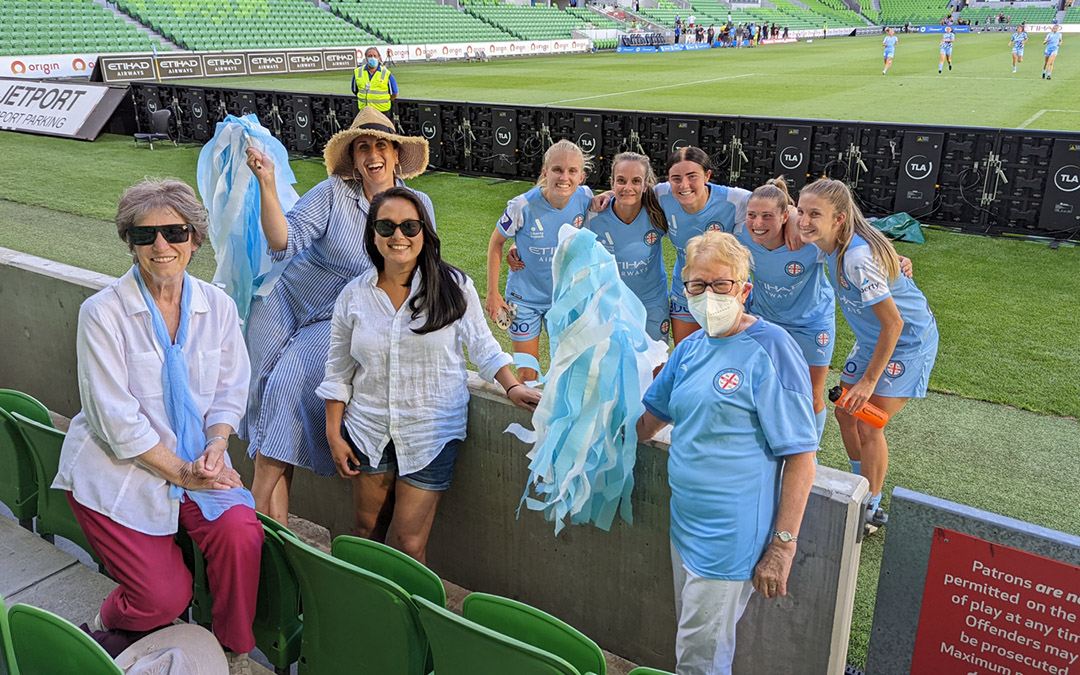 Over the past few months, one of our Missionary Sisters of Service (MSS) based in Melbourne’s outer south-east, Bernadette Wallis, has befriended several young women who play professional soccer for Melbourne City Football Club. Bernadette explained that she was coming home from her early morning walk when she met two of the girls as they were heading off for the day. ‘We struck up a conversation, and one thing led to another,’ she said.

‘Though playing for Melbourne City, many of the young women come from interstate and haven’t seen their loved ones for some time – travel during the period of COVID lockdown has been particularly difficult.’

In true MSS style, Bernadette has welcomed the players, who are being accommodated nearby, for a meal around her kitchen table. Bernadette prepared an Afghan rice dish, which came out of the MSS’s 75-year anniversary commemorative cookbook, Food for the Highways and Byways.

‘It was a beautiful evening of laughter and sharing of stories,’ said Bernadette.

In a show of support, Bernadette, and MSS congregational leader, Stancea Vichie, recently attended a football match at AAMI Park in Richmond with friends, Fiona Basile and Geralyn Anderson. Donned in the light blue and white colours of Melbourne City FC, and with newly created pom poms in hand, the four of them were delighted to cheer on and witness Melbourne City FC defeat Western Sydney Wanderers, 2-1.

The mission of our Sisters has always been to meet people where they are and, inspired by the Good News of Jesus Christ, to support and empower them in the love of God.

‘These young women are so inspirational,’ said Bernadette, ‘Their commitment to the sport, to one another as a team, and to passing on the enthusiasm to the next generation, is admirable. It’s been such a joy getting to know these generous and spirited women, and to be initiated into women’s professional football! We look forward to watching the Melbourne City women’s team play again!’

Side note: A couple of our sisters, Bernadette Wallis MSS and Pat Brain MSS, attended the Melbourne City FC versus Sydney FC match on Sunday 20 February, together with Fiona Basile and Marg Casey, our Highways and Byways board chairperson. Again, they witnessed the Melbourne City women’s team beat Sydney, 2:1, in what was a close and tense game! Perhaps we’ll be there to cheer on the women in the grand final!