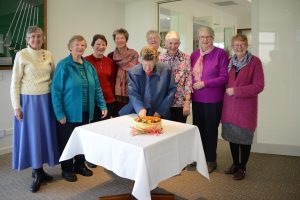 In a great spirit of joy and gratitude, the Missionary Sisters of Service celebrated 77-years of going out into the highways and byways on 8 July. Following our long-held tradition, we celebrated our Foundation Day, ‘Rosary House Day’, as it was originally known, with scones and tea.

We gathered in person where possible, and also gathered for an online morning tea and series of reflections, which saw 45 people participate including many of our Sisters, staff, and members of our mission entity, Highways and Byways – A Community of Service. We gathered from Victoria, Tasmania, South Australia, New South Wales and Queensland. Celebratory lunches in the various locations followed time of reflection online.

We’re grateful to Sally Neaves, Integral Ecology Animator and Ministry Coordinator with the Sisters of Mercy, who facilitated our time of online reflection. This year we also mark the 20-year anniversary of the death of our founder, Fr John Wallis. He died on 3 August 2001. Together we reflected on Fr John’s life and legacy and how his spirit lives on in the MSS and Highways and Byways – A Community of Service, formerly known as the John Wallis Foundation.

‘I remember the Catholic Life Exhibition in 1955 in Melbourne, where a long line of people had come to see the Caravan nuns,’ said Fr Graeme. ‘All of the students at Corpus Christi were there and they all wanted to know about the Caravan nuns and Fr John Wallis. So, as a Tasmanian, I’d fill them in.’ By way of background, when John was a newly ordained priest in the Archdiocese of Hobart, aged 23, he was sent out on mission to visit isolated Catholic families living on Bruny Island, south east of Tasmania. There, he met a young mother of four who asked Fr John, ‘What about our children? Doesn’t anyone care about us in the bush?’ These questions never left Fr John, who, after 11 years, established a small community of women in 1944.

The pioneering community was charged with missionary work for ‘the conservation and propagation of the Faith, especially in scattered and isolated rural districts.’ The motto was ‘into the highways and byways’, a call to be a journeying community. For some years, the Sisters would use a caravan, which served as as their accommodation and a mobile Chapel. A marquee attached to the caravan served as a classroom on many occasions.

Continuing his reflection, Fr Graeme said that during his own priesthood, he often met with Fr John, ‘spending time together just talking and sharing’. Fr John had a great love of reading, particularly Scripture and he’d encourage the priests to do the same. ‘He was really a man of his times and a man of encouragement for us – his reading, his love of the outdoors, his humour, his readiness to talk, and to laugh about life,’ he said. ‘He really was a man of action. He loved being with the priests and he loved sharing with us.’

Fr Graeme spoke of the deep impact that Vatican II had on Fr John’s priestly ministry. ‘His grasp and understanding of the Vatican II Council and the documents was so refreshing and so open,’ he said. ‘Through all the changes, John’s humanity shone through. The John Wallis that we grew to know and to love was truly a man of freedom as far as we were concerned as priests. He totally threw clericalism out of the door before clericalism was talked about. He was so open to the spirit of God’s love of the people and in the world.’ 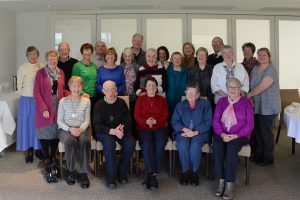 ‘There’s one aspect of John’s life, however, which taught us a lesson as priests and that was his tremendous understanding, recognition and understanding of the dignity and spiritual giftedness of women. There’s no doubt this would have come from his wonderful association and spiritual union with his mother. He really led the way in that way. I think we all appreciated that and have grown to love him for it.

‘John’s spirit has continued to live on through the MSS and the wonderful work of Highways and Byways. John has left a tremendous legacy and I think for those of us who knew him and shared with him, and all the things that happened with him over the years have been a gift to us. He’s been a wonderful gift to Tasmania, a wonderful gift to the people of God.’

During the online gathering there was time for small group discussions and further sharing about Fr John’s life and legacy on the MSS. Among those who shared, Pat Quinn MSS said, ‘I was always very touched by Fr John’s vision and his focus on flexibility and adaptation. I’m sure that he’s been well and truly with us in this moment of transition in our history.’

Bernadette Madden MSS said, ‘One of the catch phrases I remember a lot from John, was “Moving with the signs of the times”. Looking at the screen today, with the 40+ people, that includes a lot more than just the MSS faces who normally gather to celebrate Rosary House day. That says a lot to me about where we move and where we continue to grow according to John’s vision. I’m sure John and Kit Hawkins would’ve had no idea this’d be happening when they were talking about it in the 1930s. To me, it’s a sign of growth and life as we move forward.’