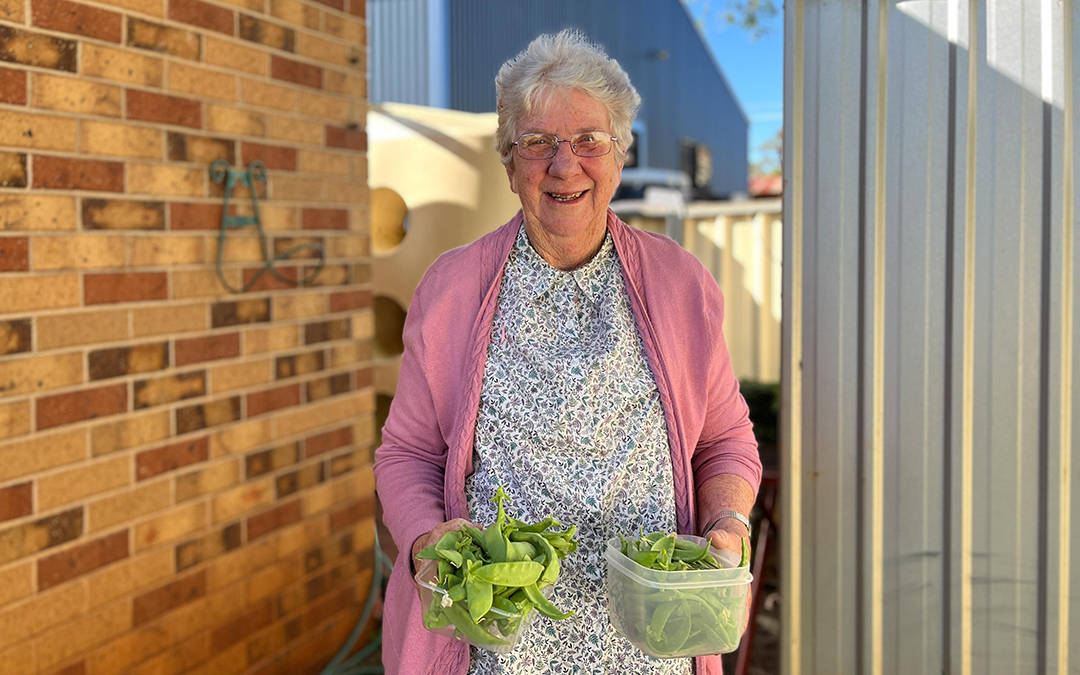 This year, Mary Cleary celebrated the diamond jubilee (60-year anniversary) of when she first joined the MSS. She was 22 years old, and had moved from her hometown of Warwick, a town about 130 kilometres south-west of Brisbane, Queensland, to join the community down south, in Hobart. In two and a half years, she’ll be celebrating the 60-year anniversary of her first profession. Reflecting on her life, Mary acknowledges there is much to celebrate, but also wonders where all the years have gone! ‘It’s been a wonderful experience for me—all those years, all those places that I’ve been to, and the people I’ve met along the way, which I wouldn’t have experienced had I not been an MSS,’ she said.

Over the years, Mary has served in pastoral settings in Scottsdale, St Mary’s and Beaconsfield, Tasmania; in Parkes, New South Wales; in Whyalla, South Australia; and Toowoomba, Queensland. However, it was her 11 and a half years in the Jandowae parish (1999-2011), located in the Western Downs Region of Queensland, about 130km northwest of Toowoomba, where she served as pastoral leader, which holds a special place in her heart. As well as serving in her own Church community, she assisted in other denominations, too. For instance, she officiated at a funeral for both the Anglican and Uniting Churches. ‘I was involved in so much in the town and I think that’s what made it so special; Jandowae was a little country town, but it had quite an extensive country area surrounding it, where we had parishioners living,’ Mary explained.

‘It was wonderful to be in the one place for so long and to get to know the people really well, and to see them regularly. It was a tremendous grace to be there with them, to accompany them in all of their joys and sorrows, their ups and downs. That was a really special blessing.’ Mary often marvelled at the openness of the people she met, and their trust in sharing their lives and stories with her.

Eleven years ago, Mary retired and has lived in Toowoomba, ever since. She is grateful that she still enjoys good health and can continue serving in her local community. Mary is spiritual adviser to the Cathedral St Vincent de Paul society, is part of local social justice groups, and regularly attends classes at U3A (University of the Third Age). She enjoys pottering in her vegetable patch and tending to her many flowers in the garden. She’s also grateful that there are several other MSS who live nearby, who she visits regularly. ‘We catch up fairly regularly, for birthdays and anniversaries, and things—though, we don’t need much of an excuse to get together!’

She is also grateful for her family—her parents, and sister—and for all the opportunities she’s had in life both before joining the MSS, and afterwards. Tragically, Mary’s parents were killed in a car crash in 1975, only weeks after she’d arrive in Whyalla to work in the Port Pirie Diocese in South Australia

(she was 34 years old). ‘That was the most extraordinary experience of how I got home from Whyalla back to Warwick, with a plane that only landed in the little country town once a week and it happened to be the day that I needed to get to Adelaide. And then to get the last seat on the plane from Adelaide to Brisbane. There were a whole series of things that happened that got me back to Brisbane that night. And then my cousin took me home to Warwick the next day. I’m so grateful for how so many people rallied around to get me home. I look back now and think, “God, how did I do it?” but somehow I did it, and I survived it all, but it was an extraordinary time.’

‘I really have so much to be grateful for: I have a heart for travelling, so I found the right spot with MSS, although, it was really the people at the end of the long distances that made the travelling worthwhile. I’ve just been so grateful to arrive at where we had to go and to always arrive home, safely. That’s been a great blessing.’