Celebrating our Past – Energising our Present – Open to the Future 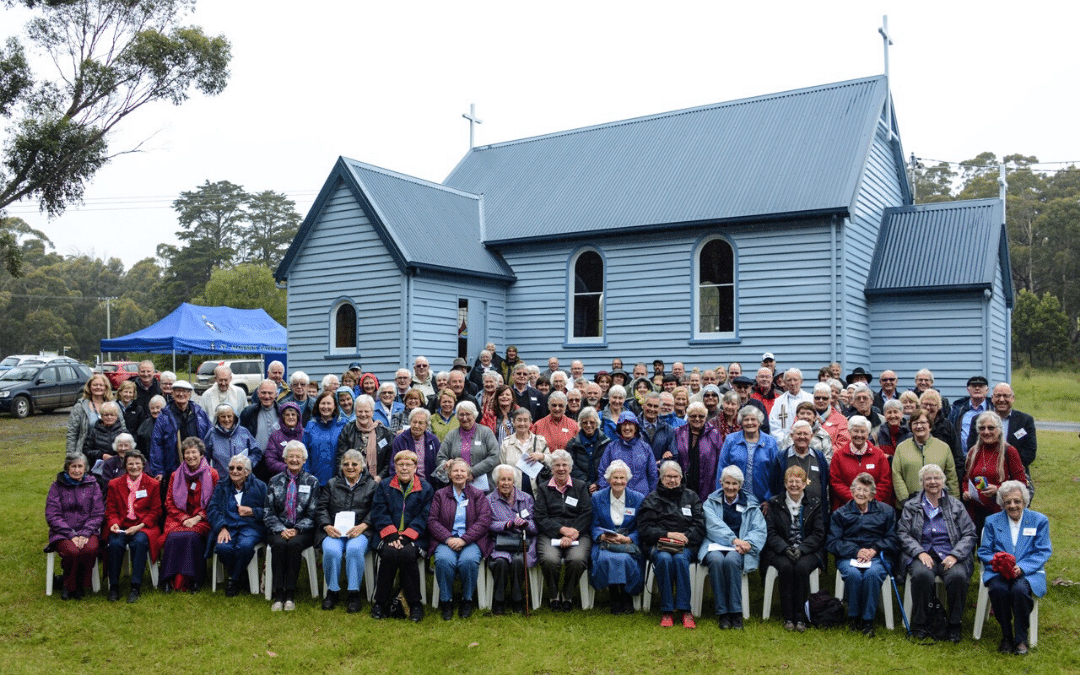 July 2018 marked the beginning of the 75th year since the beginning of the Missionary Sisters of Service (MSS).   Our celebrations began in November with a pilgrimage to Bruny Island where it all began. A busload of pilgrims, thirteen Sisters and fifteen friends and associates, gathered in Launceston where the founding members of the community first came together in July 1944.  Their house, loaned to them by St Vincent’s Hospital, has gone.  In its place are extensions to the hospital. 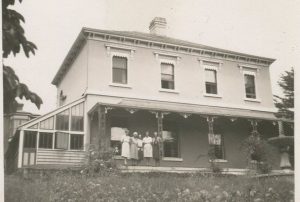 Our pioneering women at their Frederick Street home in 1944

While the original house has long gone, the oak trees along the street front still harbour that early history.   We pilgrims gathered under its branches for a photo, and to remember those who’ve gone before us. 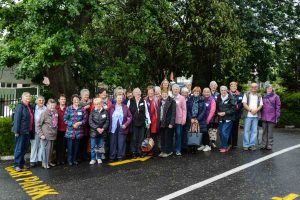 The group was welcomed to Calvary St Vincent’s by Ed van Galen, Director of Mission.  After celebrating a ritual in the chapel, we were treated to a delicious morning tea and met a number of other staff members. 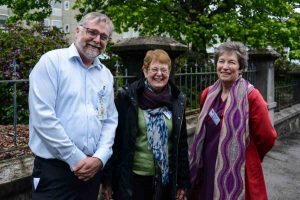 We then journeyed to Scottsdale and Derby, the first parish visited by our early sisters.   The parish priest, Fr Edwin, celebrated Mass, which was followed by a lunch of hot soup and finger food, all lovingly prepared by the small parish community.  Much meeting and greeting and renewing of old friendships accompanied the meal. There was so much joy in the room! 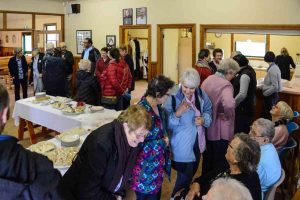 Over the following days the pilgrim bus worked its way south, via Longford, Oatlands, Richmond and Hobart.   In each place we pilgrims were welcomed by people among whom the sisters had lived and worked.   After a brief ritual in the parish church, we were treated to a home-cooked lunch or a cuppa, according to the time of day.   It was heart-warming to experience the love people retain for the Sisters they had known over the years.  Each place evoked treasured memories and stories of the years the Sisters worked there. 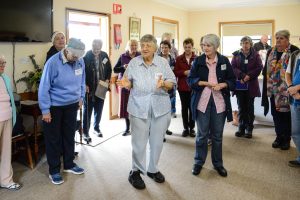 Pat Quinn mss thanking the people of Longford for their warm welcome. 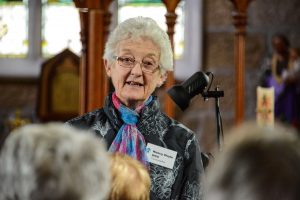 At Oatlands, Nancy Doyle mss read a moving tribute to her, written by Vera Fisher when she left that parish in 1989 after five years as Parish Leader.   When appointed in 1984, Nancy became the first woman Parish Leader in Australia. 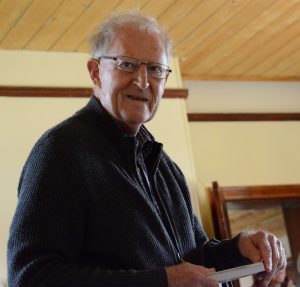 At Richmond, Fr Graeme Howard, a long-time friend of Fr John Wallis, shared some of his memories of him with the pilgrims.

On Sunday 25th November 2019 we journeyed to Alonnah and Bruny Island, joined by another busload and many others who came in their own vehicles.   After a meet and greet opportunity, we were treated to lunch, prepared by the local CWA 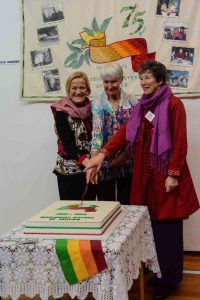 The climax of the pilgrimage came when everyone gathered outside St Brendan’s church for the blessing and dedication of a memorial to Father John Wallis, the founder of the Missionary Sisters of Service, the women who came together in 1944 to begin what became the MSS community, and those who followed them into the highways and byway of Australia and beyond, seeking out people on the margins, whether geographically, socially, economically, culturally or because of their faith, sharing their lives in love, friendship, support and hope. 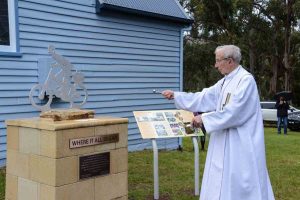 The memorial situated in the grounds of St Brendan’s church, comprises two interpretative panels (pictured below) telling the story of the beginnings and development of the Missionary Sisters of Service.   Between them is a sandstone feature with a silhouette of Father John on his bicycle visiting people on Bruny Island, as he first did in 1933.  On one of those visits – to the Hawkins family – the mother, Kit, challenged Father John with a question that started it all:  Why can’t we have Sisters to help us…..

And so the first seed was sewn in the heart of Fr John, which saw the creation of a new congregation of women in 1944, in Tasmania. 75 years on we give thanks for this great gift in our own lives, and we give thanks to all who have been part of our journey.

The panels that tell the story of Father John, the Missionary Sisters of Service and their mission. 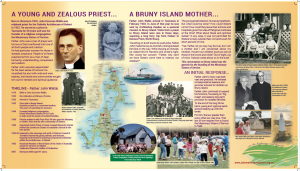 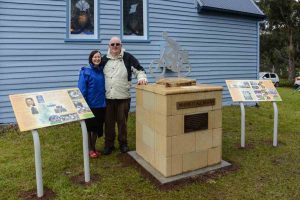 Angela and Dennis Derrick. While many people were involved in the design and content of the memorial, Dennis undertook its creation and installation. The centre-piece depicts Father John on his bike – his mode of transport on his early visits to Bruny Island. 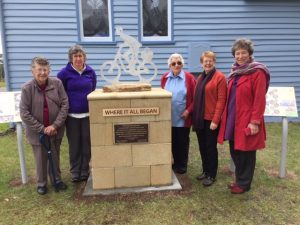